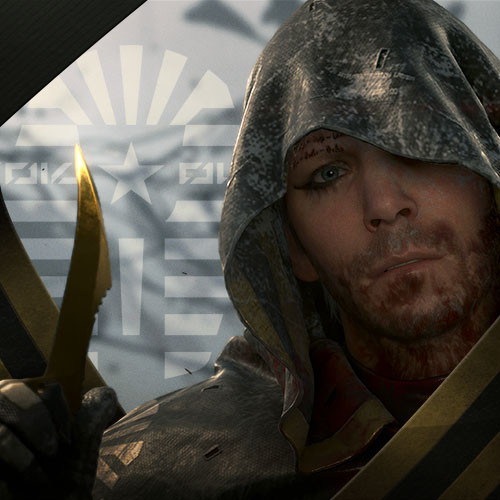 With fans new and old all enjoying DEATH STRANDING DIRECTOR’S CUT, now available, actor Troy Baker gives an insight into his time playing the role of Higgs. Higgs, also known as the “Man in the Golden Mask”, is the enigmatic leader of the Homo Demens and a mysterious opposing force to Sam as he attempts to reunite America

Troy Baker has worked on many video games during his career as an actor, but found the experience of playing Higgs and working on DEATH STRANDING DIRECTOR’S CUT alongside his fellow actors such as Norman Reedus, who plays Sam, exciting and inspiring.

Can you tell us what was going through your mind when you first heard about DEATH STRANDING as a concept? What was your initial reaction?

Hideo Kojima’s legacy and impact on the industry is indelible, incontrovertible and palpable and it permeates in design, character and narrative, but typically creators of that caliber only get one of those “hits”. Lightning doesn’t strike twice. When I first heard the story and saw the scope, my jaw dropped. I remember thinking “Well, damn. He’s done it again.”

For those who don’t know, who is Higgs? What’s his significance in the game?

Higgs is a counterpoint to Sam. He acts as the cat to Sam’s mouse and exists to remind Sam, and the player, of the real danger that exists in this world. He’s the seed of doubt and he’s the catalyst.

How did you prepare for the role of Higgs?

I always ask a lot of questions. Like, a LOT. I want to know everything about the characters I play. I want to see works in progress, I want to understand design choices and how that affects the story so I ask questions and I listen. From that point onwards it’s just trust. A huge amount of trust has been extended to me to make choices and to be daring in those choices. It’s the responsibility of Kojima and the team to then shape those choices into what makes the most sense for the story. I try not to edit and self direct. I just try to go for it and wait for someone to tell me to stop.

Have you got a favourite line from the script?

I gotta say “No BT’s, no void outs, no bullshit, just a good old fashioned boss fight.” was special. The entire “one last game over” monologue was just such a great concept. Wonderful directorial choice.

He’s a cocktail of controlled chaos and creative genius and there’s not a singular aspect of the character, story or world that he cannot explain with exhaustive detail. At the same time he’s genuinely open to the co-authorship of the character. I always felt like he wanted to see what I would do or what choice I might make.

What was it like working with the cast behind DEATH STRANDING? Could you share some of your experiences? Were there any standout moments that come to mind?

The work ethic of Norman Reedus is incomparable. He’s relentless. Down for anything and absolutely fearless. He’s certainly no stranger to stages of all sizes and types but there is inherently something unsettling about being on a performance capture stage. Everything that normally informs one’s character such as sets, wardrobe and props are gone. Even though Kojima Productions went to great lengths to incorporate as much of Sam’s outfit into the mocap suit, it still requires a lot of mindwork. Norman never missed a step. And on top of all that, he’s just great to hang out with.

You’ve had a lot of great roles in your career, which do you enjoy more? Playing the protagonist, or the antagonist?

I love how you frame that. The mark of delineation between hero and villain is one entirely composed of subjective perspective as we are all the heroes of our own story. But the interplay between opposing forces is one I love exploring the most. Which side I’m on depends on which side I’m pushing against. At the end of the day I want to be challenged by the role I’ve been given and I want to channel that into giving other characters in the story something to work off of.

How does voice-acting for video games compare to other performance work you have done outside of games? Do you prefer one to the other?

I show up to each job with a toolbox. Sometimes it’s on a stage with a mocap suit, other times it’s a booth with a mic. And then there are still other times when it’s the full smash with lights, camera and the whole Hollywood package. My job as an actor is to use the tools I’ve been given to best carry the character to the next stage of life. Regardless of the medium, I will pass that baton off to someone else and the responsibility of bringing the character further to life will shift to them. That goal never changes.

One last question if you don’t mind! Quickly shifting gears from your voice-acting to music, it was National Music Day recently. What music have you been listening to lately?

I’m such an eclectic blend. My tastes vary by mood. I can dive deep into my 80’s synthwave love or dip my head beneath the surface of what artists are making today. I’ll often let Spotify’s algorithm determine what I listen to as I discover more artists that way. It’s truly never been a better time to be a musician. To have the ability for your music and your art to be heard so easily by so many is just mind blowing.

This site contains content unsuitable for younger audiences. Please enter your date of birth to continue.

Apologies.  But you are not permitted to view these materials at this time