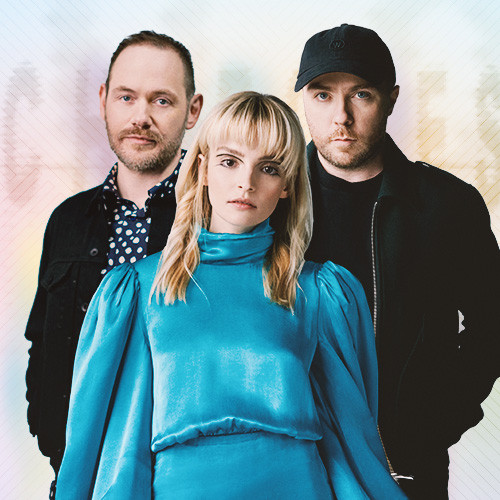 The music of DEATH STRANDING is what ties the entire gameplay experience together, with a range of beautiful songs from talented artists. The song suitably named “Death Stranding” and featured on the game soundtrack was produced by the Glaswegian synth-pop trio CHVRCHES.  Written especially for the game, it fits perfectly with the ambient settings of DEATH STRANDING and flawlessly rounds up the final chapter.

Along with being widely streamed and listened to both inside and outside of the game, “Death Stranding” was also used to soundtrack our 5th Anniversary of KOJIMA PRODUCTIONS and as a way to thank our community for their continued support of our studio. We’d love for you to learn more about CHVRCHES and how their music helped to shape Hideo Kojima’s creation.

What was it like when you first met Hideo Kojima at the Tokyo studio?

Meeting Hideo Kojima for the first time was a very memorable day for the three of us. He and his team were incredibly hospitable and made us feel right at home in the studio. As a fellow geek, it was great to get a look in his office and see all the memorabilia that he collects. I could spend all day in there talking about all the amazing artefacts! Seeing DEATH STRANDING in action was the highlight for me, Mr. Kojima sat down and talked us through the game for about an hour and as he played and talked, I began to realise just how amazing and unique the game really was. I had seen trailers and screenshots but the concept and execution of the game was unlike anything I had seen before or since.

How did you feel about your song being used as the final song heard in the game?

It was such a great honour. We wrote the song after we watched him play the game so, the most important thing for us to achieve was to somehow inhabit the atmosphere and emotional world of the game in our song. Not an easy task but we knew we were on to something when Mr Kojima said he cried when he first heard it!

How do you think the track relates to the game?

The song I think is quite impressionistic and relates to the game kind of loosely in terms of the lyrical content - there are no super direct references to the plot or characters - but in a deeper way I think the lyrics belong in the world of DEATH STRANDING. We wanted it to feel part of the game but also a standalone song in its own right.

“What will become of us all at the end of love,” I think this lyric encapsulates one of the important things Mr Kojima was communicating through the story of the game. The world of the game is in part an allegory of how connected we have become in our modern world yet lacking in love and empathy for our fellow humans.

Have you played DEATH STRANDING? What was your favourite moment?

The first encounter with the BTs was a favourite of mine. Scanning the landscape and finding them close by was such a tense moment and getting caught then pulled into the black water was very cool and otherworldly. Later on, when you get the ability to cut the umbilical cords of the BTs was a brilliant addition to the gameplay. The BTs were such a weird and scary enemy set against a bleak but beautiful background.

Which DEATH STRANDING character is your favourite?

Heartman was the most interesting character in my opinion. Intentionally dying and being brought back to life by the automatic defibrillator was a really interesting idea and I loved his lab up in the snowy peaks of the mountains. The fact that he was played by Nicolas Winding Refn was a lovely touch!

Have you seen our “Thank You” video for the 5th anniversary? What was your reaction to seeing that and watching the community contributions?

It was very emotional indeed to hear our song as a part of the video. It’s no surprise to me that this game and the world that Mr. Kojima has created has touched so many people. I could see that DEATH STRANDING was something very special from the first moments I watched him play it.

What does the future hold for CHVRCHES within the gaming industry?

I don’t think that there’s anything currently on the horizon but it’s a world that we are very close to and we are always excited about working with other artists with huge imaginations and visions.

We decided for the first time to name our album before we really got into the flow of writing and recording. It was a name that was on a big list of band names right at the beginning of 2011. We decided on CHVRCHES but we still liked the idea of doing something with “Screen Violence”. Lauren had stumbled upon the list at the start of 2020 and proposed it as a kind of creative starting point for the new songs. It allowed us to invoke some of the cult movies that we grew up with - musically as well as lyrically - which was a huge amount of fun. It also helped create a sort of coherence to the album as a whole.

The album features special guest Robert Smith, what was your experience like working with him on the track “How To Not Drown”?

Robert Smith is one of our all-time musical heroes. The Cure was a very important influence in our development as songwriters and producers and so getting the chance to work with Robert was truly a dream come true. We did all of the collaboration over email. Firstly after we made contact and asked if he would like to work with us on a song, we sent him a bunch of songs that we had been working on. “How Not To Drown” was the one he felt most drawn to and said he would try some things. When he sent us his demo we were blown away! Hearing his voice and legendary Fender VI bass playing on one of our songs was something I don’t think any of us expected we would ever hear.

KOJIMA PRODUCTIONS Celebrates its 5th Anniversary
On December 16 2015, KOJIMA PRODUCTIONS opened its doors and began its journey as an independent game studio.
Read More
Behind the scenes with Léa Seydoux
Actress Léa Seydoux reflects on her experience of working in video games and how her character, FRAGILE, evolves in the new cut.
Read More

This site contains content unsuitable for younger audiences. Please enter your date of birth to continue.

Apologies.  But you are not permitted to view these materials at this time